In the summer of 2009, the Dutch singer/songwriter René Köhler did invite some musical friends from Finland and Holland at his old lumberjack house “Ukonhattu” in Pyhätunturi [Lapland] to work out and to record some songs.

In a period of two weeks, with recording engineer Visku Väisänen and the useful help of the Midnight Sun, this resulted in the spontaneous debut album ‘The Ukonhattu Sessions’.

This debut got great reviews and plans for a follow up were easily made. The new album ‘Just Because’ has been recorded in August 2012. Again the Ukonhattu was turned into a recording studio, but this time the recordings has been done with the Finnish members which resulted in a more solid band sound on the album. Nevertheless, in live gigs Musher songs can be played in many ways by the different band settings, which is an attractive factor for either band and audience.

The popsongs are a mix of Blues, Folk, Pop, Country, Surf and Rock. Sometimes slow and acoustic, sometimes uptempo and amplified. An authentic sound with catchy tunes which makes it easy listening for both older and young listeners.

In February 2015 the new EP ‘Below Sea Level’ is recorded at the Pro Music Studios in Eemnes (NL). This time it’s fully a Dutch project. Recorded in the Netherlands and played with the MUSHER guys from Below Sea level. Four songs with a roots background in different styles.

The difference in songs is just as diverse as the band setting is. MUSHER [officially; Traveller with dogs] is picked as band name to provide the Arctic feel and contains Antti Rikkilä on drums and Lasse Harma on 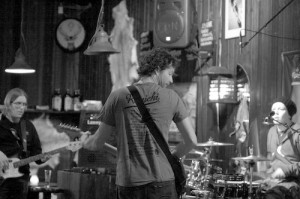 bass in the Finnish setting. 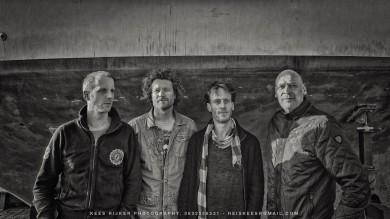 The Dutch edition is formed by Tom Marcelis on drums, Jeroen Pos on guitar and Ron Peereboom Voller playing the bass.